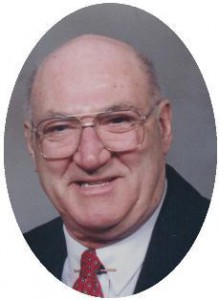 He was born June 5, 1930 in Port Washington to John and Florence Meyer Husting. He served in the US Army from September 28, 1948 to September 27, 1949 and was active in the US Army Reserves until April 20, 1960.  He married Mary Eichenseer of Port Washington on August 29, 1953 at St. Mary’s Church in Port Washington.  Ollie worked for Power Products / Tecumseh in Grafton for 42 years retiring in June, 1995.  He was a long time member of the International Association of Machinist and Aerospace workers, Local 1326.  They lived on W Grand Avenue for many years before moving to Maple Crest in July of this year.

The Rev. Allan Sommer will celebrate a Mass of Christian Burial at 7:30 pm Friday, October 8, 2004 at St. Mary’s Church.  Cremation with final entombment in St. Mary’s Cemetery.  Visitation from 4 – 7 pm Friday at the funeral home.