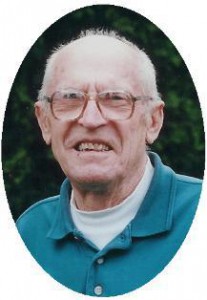 He was born in Sheboygan, Wisconsin on August 11, 1921 to Louis and Victoria Schimkus Buivid.  A 1938 graduate of Port Washington High School, he was a sportsman and played football.  He also worked as a pinsetter for the former Bley’s Recreation. In September of 1942 he entered the Army and served in Hawaii during World War II.  He was discharged in November 1945 with the rank of Private First Class.  Upon his return he took a job at the Wisconsin Electric Power Plant in Port Washington and retired 38 years later as a mechanical rigger in 1983.  He was a member of the International Union of Operating Engineers, Local 317.

He met JoAnn Watry of  Port Washington and they were married July 21, 1951 at St. Mary’s Catholic Church in Port Washington.  He was active in the Port Senior Center and the Green Felt Club.  An avid golfer he participated in the Squire’s Sundown League and was very proud of his Hole-in-One on Squire’s #6 in May of 1985.