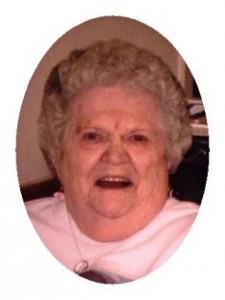 Marie J. Husting, age 88, formerly of East Monroe Street in Port Washington, died peacefully on Thursday, April 4, 2013 at Luther Manor in Wauwatosa where she has resided since 2007.

She was born on June 29, 1924, daughter of Peter and Paula Seidl Christensen in Milwaukee. She graduated from Lincoln High School.  On February 23, 1946, she married Richard F. Husting, Sr. of Port Washington at St. Mary’s Catholic Church in Port Washington.  He preceded her in death on August 2, 1994.

For many years they lived on High Street.  Marie was a switchboard telephone operator and a homemaker.  In the 1950’s, Wisconsin Telephone’s switchboard was located on North Franklin Street in Port Washington.  The operator sat on the second floor above what is now Bernies Fine Meats, across the street from the Smith Bros. Restaurant.  One particular night, Marie was working and called in that the restaurant was on fire.  The fire was extensive and the restaurant needed to be rebuilt.  Marie moved on to work with Harnischfeger Homes of Port Washington.  There she ran the switchboard and reception.  She later transferred over to Simplicity Mfg. Company in Port Washington providing the same duties there.  She retired from Simplicity in 1986.

Marie enjoyed knitting, crocheting and cross-stitching.  She had fun casino gambling and socializing with family and friends.  She loved to play sheepshead and did so quite well.  Lastly, most knew she was an avid Brewer and Packer fan.  She always looked forward to opening day.

Her Funeral Mass will be celebrated at 6PM Wednesday, April 10 at St. Peter of Alcantara Catholic Church, 1800 N. Wisconsin Street, Port Washington.  Reverend Patrick Wendt will be the celebrant.  Visitation will be from 4-6PM Wednesday AT CHURCH with a 4PM rosary. Entombment will take place at St. Mary’s Cemetery in Port Washington.  Memorials of the donor’s choice are appreciated.