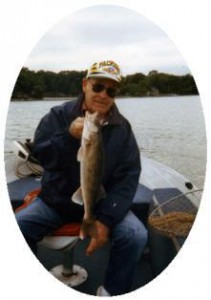 John C. “Jack” Torbeck, age 85, died peacefully Saturday, March 16, 2013 at Lasata Care Center, Cedarburg where he had resided for the past year.

He was born on November 18, 1927 in Milwaukee, son of Edward and Hedwig “Hattie” Sager Torbeck.  After graduating  from North Division High School, Jack entered the US Army.  He was a Private First Class serving from February, 1946 to May, 1947 in Italy.  Upon returning to Milwaukee, Jack married the love of his life Marion Rocco, also of Milwaukee.  Together they made their house a home raising three children.

For over 40 years, Jack was a meter reader for Wisconsin Gas Company (WE Energies). He liked to keep busy after his retirement in about 1989 by fixing small engines at his home.  He really enjoyed fishing and would do so whenever he had the chance with family and friends.  In the past few years, Jack and Marion lived in Ozaukee County, spending quite of few years at the Maple Crest Apartments in Port Washington.