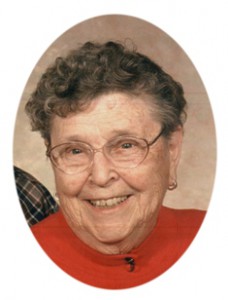 She married Felix Charles Griksas Jr. on October 12, 1940 at Holy Name of Jesus Catholic Church in Sheboygan, Wisconsin. They purchased his family’s dairy farm and work side by side for many years. She also worked at Philip Sales in Port Washington, the Sears Catalog store in Port Washington, and later as a cafeteria worker at Thomas Jefferson school in Port Washington retiring in 1985. Her husband, Felix, preceded her in death on October 30, 1989.

Eleanor was talented in the kitchen, making delicious treats too numerous to list. She also enjoyed gardening and making strawberry preserves and jams, needlepoint and knitting. She was a devout catholic and faithful woman who was a member of St. Peter of Alcantara Catholic Church in Port Washington.  She loved her family and adored her grandchildren.

Funeral Services have been held.  The Reverend Patrick Wendt officiated with interment at St. Mary’s Catholic Cemetery in Port Washington.