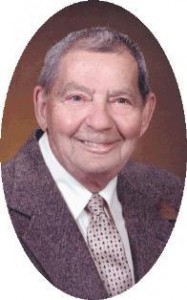 Donald “Don” Gore, 78, of E James Drive in Port Washington died Friday, May 28, 2004 at Columbia St. Mary’s Hospital – Ozaukee Campus in Mequon.  He had battled Non-Hodgkins Lymphoma for the past ten years.

He was born in Bayview, Wisconsin on May 31, 1925 to William Gore and Anna Dannehl.  He met Geraldine “Jeri” Schmitt of Bayview, Wisconsin and married her on September 9, 1944 in San Diego, California.  He was a Corporal in the 5th Marine Division during World War II and received a purple heart in the battle of Iwojima in 1945.

The couple resided in River Hills and Mequon raising a family and in 1986 moved to Port Washington.  Don was a production manager for Paper Machinery Corp. in Milwaukee for 30 years, retiring in 1981.  He loved to golf prior to his ill healthand also enjoyed hunting and fishing.  His family was very dear to him and they were always near.  He was a member of the Rose-Harms American Legion Post 335 in Grafton and a former member of the Knights of Pythias in Milwaukee.

Don is survived by his wife Geraldine “Jeri” of Port Washington, and five children Spencer (Janice) Gore of Mequon, Gregory (Diane) Gore of Greenfield, Scott (Holly) Gore of Milwaukee, Bryan (Cindy) Gore of the Town of Grafton and Steve (Barb) Gore of Neenah.  He is further survied by nine grandchildren, two great grandchildren, other relatives and friends.  A sister, Marie Clark, and brother, Wilbur Gore, precede him in death.