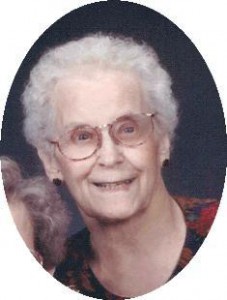 She lived in Saukville most of her life.  In 1980 she married Mr. Gerl and moved to Waupaca, Wisconsin.  In 1992 she returned to Ozaukee County, moving to Port Washington.  Over the years Olive held many jobs including, Northern Signal in Saukville and Milwaukee Machine in Mequon until she retired in 1980.  Olive was a charter member of the Women of The Moose, Lodge 1301, Saukville and a member of the Catholic Order of Foresters St. Henretta Court.  She enjoyed bowling after her retirement and played sheepshead or cribbage at the Port Washington and Grafton Senior Centers.  She enjoyed bowling and after retirement probably bowled every day.She loved to bake bread and was very proud of her age, reaching her 90’s.

Mass of Christian Burial will be celebrated by Rev. Karl Acker 7:30 pm Tuesday, May 18, 2004 at Immaculate Conception Church in Saukville.  Interment parish cemetery.  Visitation from 4 – 7 pm Tuesday at the funeral home.