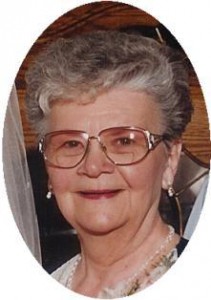 She was born in Chicago, Illinois on February 23, 1926 to William and Frances Steapenak Greinert.  She met George H. Gabrich of Milwaukee, Wisconsin on September 21, 1945 in Milwaukee, Wisconsin.  They raised a family on Tower Drive.  Upon George’s retirement they moved to Rhinelander.  In August 2005 they moved back to Port Washington.  George preceded her in death on October 9, 2005.

Through the years Mildred enjoyed various hobbies including cake decorating, hat making, ceramics, knitting and crocheting.  She made many afghans for family and friends.  She also worked as a matron at the Ozaukee County Jail and later at Simplicity Manufacturing in Port Washington.