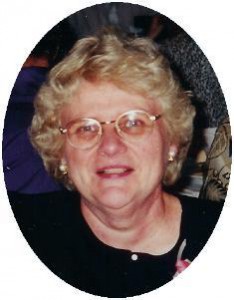 Ruth  was very active with her girls throughout their schooling and their activities, especially Girl Scouts.  She enjoyed bowling on the Ladies league at Harbor Hills for many years.  She loved to travel to where her children lived around the United States and Germany. When her children got older she took a job at Kohls Department Store in Grafton and was the Shoe Departmet Manager for over 26 years when she retired 2002.  She was a lifelong member of Immaculate Conception Church.

She is survived by her husband Tom of Saukville and her three daughters Ann (John) Bulka of Chandler, Arizona, Amy (Michael) Dourisboure of Bexley, Ohio,  Sally (Tim) Larsen of Helendale, California.  Further survived by a sister, Helen (Eugene) Hess of New Berlin, Wisconsin, other relatives and friends.  Preceded by her parents and sister Dolores “Dolly” Dickmann.