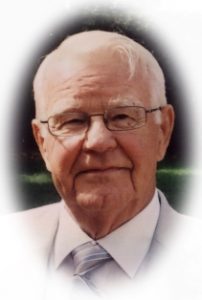 Eugene W. “Gene” Ewig, age 88, formerly of West Jackson Street, Port Washington, WI passed away Thursday, May 10, 2018 at the Lincoln Village where he had resided the past year.

He was born in Port Washington, WI on December 21, 1929 the son of Elmer and Antonia Walus Ewig. A third generation purveyor of fish, Gene’s family moved to Sheboygan in 1935 because Port’s harbor was deemed unsafe for the fishing boats. With his father, grandfather and numerous family members who were Great Lakes commercial fishermen, Gene grew up in Sheboygan. Upon the Port Harbor slips’ dugout, the Ewigs returned to Port Washington.

After graduating high school, Gene entered the US Army during the Korean Conflict achieving the rank of Corporal and serving from 1952 through 1953. Upon his return, Gene married Delores J. “Dorie” Stoelb – who was crowned Miss JC Penny at the first ever Sheboygan Brat Day 1953 – of Sheboygan on July 3, 1954 at Holy Name Catholic Church in Sheboygan. They resided in the Milwaukee West Allis area prior to moving to Port Washington in 1962.

Gene grew up in his family’s fishing business during the summer and weekends. He received a degree in Business from the University of Wisconsin, later taking a job with JC Penney in Sheboygan. He would later take over the family fishing business. A delicatessen would be built next to the smokehouse and west slip, featuring fresh, fried, and smoked fish. It would remain through the 1970’s. When a fire destroyed the original smokehouse, a new smokehouse was built across the street on South Wisconsin Street and is currently operated by Gene’s son, Jeff Ewig and grandson, Matt Ewig.

Gene was instrumental to the development of Port Washington’s famed Fish Day festival, serving as the Grand Marshall one year. For over 41 years, Gene was a member of the Port Washington Park and Recreation Board, receiving a commendation for his service to the city. He was also an active participant in the City of Port Washington Planning Commission, Port Washington Kiwanis and the Chamber of Commerce. Gene had a passion for sports. He loved sitting in the stands at Badger, Packer and Brewer games. He was an avid bowler, participating in Ozaukee County leagues for 30+ years. He enjoyed playing golf the most, sharing rounds with his wife, family, and many friends including dear friends Roger and Jimmy Berger and the late Duffy Spiro. Gene spent his summer vacation time at a Maiden Lake cottage where he loved to relax and golf with Dorie and relatives and friends.