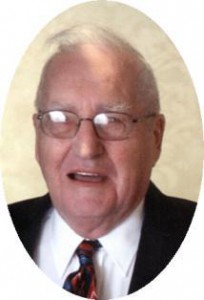 He was born February 19, 1913 in the Town of Port Washington to Michael and Veronica Deheck Dimmer.  He married Alvera Remick of Lake Church at St. Mary’s Catholic Church in Lake Church.  She preceded him in death in May 27, 1948.  On July 6, 1953 Erv married Leila Freiman of Belgium, WI at St. Lawrence Catholic Church in Chicago.  For almost 14 years they lived in Belgium.  He had been employed at the Allen Edmonds Shoe Company for 32 years.  In 1967, they moved to Port Washington.  Erv took a job at the former Koehring Co./PCM in Port Washington.  He later became a custodian for the Port Washington-Saukville School District, retiring in 1983 at the age of 70.

Ervin liked to keep busy around his home.  He took great pride in his yard and garden.  His woodworking skills were shared with many over the years.  He and his wife liked to socialize on a gambling junket now and then.  For a time he was assistant night custodian at the Port Washington State Bank.

He is survived by his wife Leila, son Michael (Sherrie) Dimmer of Port Washington; his grandsons Brett (Jennifer) Dimmer of Port Washington, Shawn (Kathleen) Dimmer of Brown Deer and Evan Dimmer of Shorewood; one great-grandson Matthew Dimmer, other relatives and friends.  He is preceded in death by his first wife Alvera, son Richard Dimmer, his sisters Esther Croatt and Olive Remick and his brother Alphonse Dimmer.

Mass of Christian Burial will be celebrated 6:30PM Monday, June 13, 2011 at St. Peter of Alcantara Catholic Church, 1802 N. Wisconsin Street, Port Washington.  Reverends Thomas Lijewski and James Ernster will concelebrate.  Visitation AT CHURCH Monday from 4-6:30PM. Interment at St. Mary’s Cemetery in Port Washington.  Memorials to the charity of your choice are appreciated.