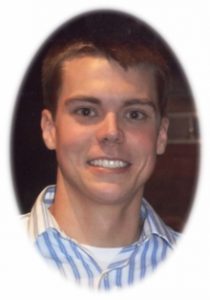 He was born on July 20, 1988 in Milwaukee, WI to David and Marla Klockow Dickmann. Growing up, he stayed active participating in Rebels football, Saukville little league, and soccer. In high school he took up swimming where he lettered two years and helped bring his four man relay team to state. His love for sports also lead to his participation in track and baseball. He graduated the following June from Port Washington High School, Class of 2007.

After his graduation, he went on to earn his Welding Certification from Milwaukee Area Technical College and later went on to work at General Metal Works in Thiensville and Kapco in Grafton. Recently he worked for Richards Floor Covering of Saukville.

While he enjoyed working with his hands, he never lost his love of sports and the outdoors. He played baseball for the Saukville Saints, coached JV baseball at Port High, swam, jet-skied every summer, and snowmobiled every winter. He was genuinely fun-loving and his inner child would shine when he walked in a room. His contagious smile and laugh along with his knack for storytelling will never be forgotten by his family and friends.

He is survived by the love of his life Laura Dieringer, his parents Marla and Dave Dickmann of Saukville, his siblings Steve (Alyce Beaumont) Dickmann of Saukville, Tom (Amber) Dickmann of Stevens Point, and Kayla (Paul) Terriquez of Elm Grove, nieces and nephew Hannah, Carolyn, Rosalie and Saul, aunts and uncles, Margo and Kenny Kraus, Marlene and Arthur “Butch” Schmidt, Ted and Darlene Klockow, and Tim Klockow, other family and friends.

He is preceded in death by his grandparents Fred “Junie” and Virginia “Ginny” Dickmann and Olive Gerl.

His Mass of Christian Burial will be celebrated at 6:30PM Wednesday, January 24, 2018 at St. John XXIII Parish-Immaculate Conception Church, 145 W. Church Street, Saukville, WI. Reverend Pat Wendt will be the celebrant. Family will receive relatives and friends from 3-6:15PM Wednesday before Mass AT CHURCH.