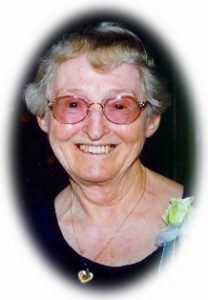 Clara L. Chossek joined her Savior peacefully in the early morning of January 14, 2018 at Lasata Care Center in Cedarburg, Wisconsin.

She was born August 13, 1918, in Ironton, Michigan to Andrew P. and Ella Kuhn Kline. She had a good, long life enjoying her 99th birthday this past August.

In 1941 she married Walter A. Chossek of Menominee, MI and in 1945 they moved to Port Washington, WI where Walter worked at Wisconsin Electric Power Company. Together they raised a family and enjoyed traveling the US pulling their Avion trailer. Walter preceded her in death February 7, 1986. In 2004 Clara moved to the Lasata Senior Living Campus.

Although trained as a nurse, Clara was a homemaker. She was a member and officer of the Port Washington chapter of Homemakers and an instructor of rug hooking and braiding for MATC. She volunteered for the Girl Scouts/Boy Scouts, quilt making at Christ the King Church and rug braiding at the Lasata Campus. Clara was an avid gardener and an award-winning rug hooker and braider.

The family is grateful to the staff at Lasata Crossings and Lasata Care Center for their kind, attentive care for Clara during her time with them.

We live as Clara lived, in the joy of resurrection and reunions.