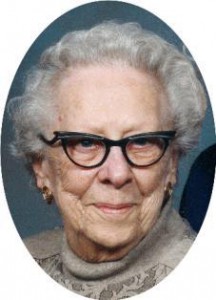 She was born July 31, 1910 to Albert and Vronie “Froney” Luebbe Wiegert in the Town of Granville (Milwaukee), Wisconsin.  She met R. Milton “Mike” Costello of Virginia and they married March 2, 1929 at St. John’s Lutheran Church in Milwaukee.  She worked as a sales clerk for Boston Store and later for Milwaukee Relay Company in Cedarburg.  She retired as a bookkeeper from Suburban Beverage in Mequon and lived in Cedarburg.  Mike preceded her in death December 9, 1983.   In the mid 1980’s she moved to Port Washington from Florida and lived with her daughter on E. Kane Street.  In 2001 she move to Lasata Health Care Center in Cedarburg.  She enjoyed knitting, making many slippers and playing sheepshead.

Alma or Nana as she liked to be called is survived by her daughter Marilyn Noesen of Cedarburg, three grandchildren Lynn (Jeffrey) Winter of Newburg, Alan (Lynn) Schoenwetter of Boiling Springs, Pennsylvania and Ann Schoenwetter of Cedarburg.  She is further survived by great grandchildren Amy Winter, Tammy (Eric) Ellison, Lee Schoenwetter, Jaimie Hooven and Bradlley Blake, great great grandchildren Jay Luckow, Moah and Ruby Ellison, a sister Irene Karner at Lasata, other relatives and friends.  A very special thanks to the Lasata staff, nurses and aides.