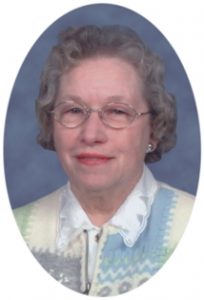 Marie Ann Brady passed away on January 19, 2017 after a one year battle with cancer. She was born at home to Albert and Gertrude Escher Bruha on a bitter cold day on February 11, 1936, in the little hamlet of Germantown, a mile west of the village of Cazenovia, WI. She attended St. Anthony’s Catholic School and Cazenovia High School. She also attended Sauk County Teachers College. On October 25, 1958, she was married to James V. Brady at St. Anthony’s Catholic Church in Germantown.

She was a member of St. Peter of Alcantara Parish, Port Washington since 1968, was president of the Women’s Guild and was very active in St. Peter’s School, having served on the School Board and was a CCD teacher. She was a Girl Scout leader and Day Camp Counselor and was a Den Mother for St. Peter’s Boy Scout Troop. She was a mentor/teacher with her special friend, Lynne, for over 25 years with the Friendship Club.

Marie’s life was being a wife, mother and grandmother. She held secretarial jobs and was an Avon Rep when her children were in school. She later became employed with the Port Washington-Saukville School District, having worked at Port Washington High School and Saukville Elementary Schools for over 20 years, retiring in 1999.  She loved gardening, crafts, a lot of “from scratch” baking and cooking. She was a friend to all, but most of all she wanted to be active in her family’s life.

She is survived by her husband, James; children Pamela (Ronald) Hineman of New Berlin WI, Kimberly (Darrel) Zaleski of Eleva WI, and Jeffrey (Lisa) Brady of Warren NJ. She is also survived by her grandchildren, Ross Hineman of Madison, WI and Camille, Nolan and Juliette Brady of Warren, NJ.  Marie is further survived by brothers, Raymond (the late Helen) Bruha of Nashville TN;  Clarence (Patti) Bruha of Cazenovia WI; sisters Louise (the late Raymond) Fronk of Reedsburg WI and Irene (Patrick) Walsh of Plain, WI; sister-in-law Patricia (the late Donald) Ryczek of Cedar Rapids IA; brothers-in-law Richard Brady and Ralph Brady both of Reedsburg WI; also many nieces, nephews and friends. She was preceded in death by her parents, Albert and Gertrude Bruha, in-laws John and Margaret Brady, sister Evelyn (the late Fritz) Kuehni of Boyd WI, and an infant son, Mark.

In lieu of flowers, donations may be made to The American Cancer Society, any veteran’s association, St. John XXIII Catholic Parish or the Friendship Club.