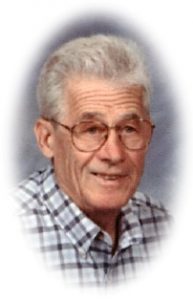 A faithful and strong family man, Ward always seemed to have an evening job. He had done janitorial work for the former Port Washington Savings and Loan, Thomas Jefferson Middle School and for Ozaukee County Administration/Courthouse and the current Justice Center for many years.

Ward was a member of the International Association of Machinists and Aerospace Workers Local 1430 for many years. Some might remember him for his early hour swimming at Thomas Jefferson Middle School pool or his neighborhood walks with his canine pal Beatrice.

Ward is preceded in death by his wife Joan, his sons James “Jim” and William “Bill” Braby, his sister Nancy Meins and his brothers Foster, Merle and Gordon Braby.

A Mass of Christian Burial will be celebrated at 7PM, Wednesday, August 23, 2017 at St. John XXIII Parish-St. Peter of Alcantara Chapel, 1802 N. Wisconsin Street, Port Washington, WI. The Reverend Patrick Wendt will be the celebrant. Interment will take place at St. Mary’s Cemetery in Port Washington. Family will receive relatives and friends from 4-7PM Wednesday AT CHURCH prior to Mass.