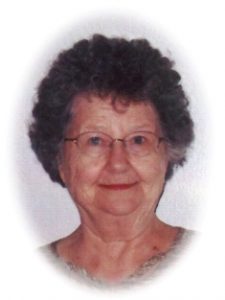 She was born in Port Washington to John and Barbara Prom Karrels on July 30, 1923. She attended St. Mary’s School at Lake Church in the town of Belgium and graduated from Port Washington High School in 1941. She married Victor Weyker in Montgomery, Alabama in 1943 and traveled throughout the south doing various civil service jobs. The couple returned to County LL in the Town of Port Washington after WWII and raised a family. Her husband preceded her in death July 7, 1995.

Lorraine loved to bake and cook, always with extra TLC. In 2000 she moved to the Maple Crest Apartments and enjoyed the many social activities there, including sheepshead. In 2013 she moved to Shepherd’s Inn assisted living in Seymour, Wisconsin to be close to her daughter, grandchildren and great grandchildren.

She was proud that her grandmother Helen (nee Lorge) Prom, mother Barbara (nee Prom) Karrels and herself had all lived past 90. She was a proud Green Bay Packer fan.