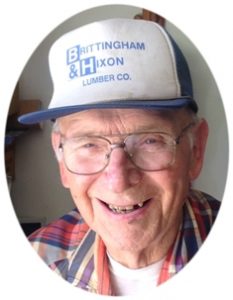 Joseph N. Bichler, “Joe”, age 86, of Sunset Road, town of Port Washington, WI, died peacefully Thursday, May 26, 2016 with his family at his side at the Lawlis Family Hospice in Mequon.

He was born in the town of Holland, Sheboygan County on May 23, 1930; oldest of thirteen children of Joseph D. and Mary Biever Bichler.  After finishing grade school in Holy Cross, he worked on the farm; later vocational school in Port Washington to learn carpentry.  Joe entered the U.S. Army during the Korean War.  Upon his return, Joe married Arline R. Becker of the town of Belgium at St. Mary’s Church on May 3, 1958.

For a few years, Joe worked with carpenters Arnold Buch and Henry Derler.  Soon he went off on his own.  Always known for good quality, Joe never really advertised, yet he always had work.  His wife helped with the bookkeeping.  She preceded him in death on September 20, 2008.  He continued to work small jobs until a few years ago.

Joe will be remembered for his workmanship, as well as, his kindness and selflessness.  He was a true “gentle man”.  Growing and sharing his vegetables and having breakfast with the gang at the Saukville “truckstop” kept him busy.  He was a member of the Landt-Thiel American Legion Post 470 in Saukville for many years.

He is survived by his son Jeffrey (the late Candice) Bichler of Port Washington; grandchildren Kayla and Jesse Bichler; three great-grandchildren; his sister Dorothy (Don) Diedrich of Plymouth; his brothers Eugene (Hermina) Bichler and Dennis (Debbie) Bichler, both of Port Washington, Michael Bichler of Fond du Lac, Anthony (Sheri) Bichler of Waukesha and David (Jeanne) Bichler of Random Lake; sister-in-law Winnie Bichler of Sussex; nieces, nephews, other relatives and friends.  He is preceded in death by his wife Arline, daughter-in-law Candice, sisters Joanne and her husband James Freden, Caroline and Rosemary Bichler; his brothers Vincent, Daniel and Jerome Bichler and Arline’s sister Rita and her husband Gilbert Clausing.

A mass of Christian Burial will be celebrated 6PM Friday, June 3, 2016 at St. Mary Catholic Church, 430 N. Johnson Street, Port Washington.  Reverend Patrick Wendt will be the celebrant.  Visitation will take place from 4-6PM Friday AT CHURCH prior to the Mass with a 4PM Rosary.  Interment will take place at St. Mary’s Cemetery in Port Washington with military honors.