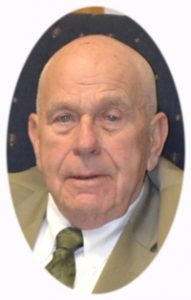 Donald J. Andersen, age 80 years, formerly of North Milwaukee Street, Port Washington, WI died peacefully in his sleep on Monday May 30, 2016 at Atrium Post-Acute Care in Little Chute, Wisconsin where he has resided the past two years.

He was born April 22, 1936 in Kenosha, Wisconsin to Henry and Margaret (Ryan) Andersen.  Don grew up on the family farm with his brothers and sister, graduating from New Salem High School, class of 1954.  He entered into the US Navy in 1955.  Don served for two years active duty and remained in the Naval Reserves until 1961. During his time in the Reserves, Don graduated from St. Ambrose University in Davenport, Iowa with a Bachelor’s of Arts degree in 1963. While in school, he worked quality control for Oscar Mayer foods.

He married Joan Thomas on January 2, 1960 in Kenosha.  In 1965, they moved to Port Washington, Wisconsin where he was employed as a caseworker for Ozaukee County Social Services until January of 1977.  He then worked as a juvenile program director for the State of Wisconsin and later for the Catholic Church as a District Director of the Catholic Social Service Office in Port Washington until 1984.  He sold Prudential Life Insurance for the next four years and then returned to the Kenosha area.
While there, Don worked at the Sears store in Anitoch, IL; later transferring to the Kenosha store.

In November of 1993 he married Shirley Mahoney, moving to Venice, FL.  For a few years, Don worked at Sears in Sarasota, retiring in 1998.  Upon retirement, summers were spent in Wisconsin and winters in Florida. A few years ago, Don returned to Wisconsin to be close to his children.

Don will be remembered for how he loved his grandchildren and for being a true green’n gold Packer fan, especially of the Vince Lombardi era.  He enjoyed hunting and fishing in his younger days.  He was a history buff that also enjoyed picking berries and morel mushrooms.  He bought and sold produce as a hobby while living in Venice, FL, where he was affectionately known as “Strawberry Don”.  Don was a kind, likable and outgoing man with a great sense of humor.  He enjoyed talking to people from all walks of life and made friends easily.

He is preceded in death by his son Thomas Andersen and his brothers Francis, Eugene, Bartholomew and Paul Andersen.