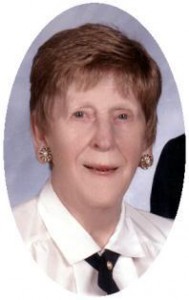 She was born on January 16, 1919 in Geneva, Nebraska, daughter of Hallie and Mathilda Dondlinger Merrill.  The daughter of a barber, Maxine’s family moved to Port Washington when she was ten years old.  Her father operated his barber shop on the corner of Dodge and Wisconsin Streets for many years.  On April 1, 1943 she married Clarence W. Bartelt from Port Washington in Indiantown Gap, Pennsylvania while he was in the military.  She had traveled with another local woman who married a week apart.  She continued to live in Port Washington.  Clarence preceded her in death on October 26, 1994.

Over the years she had worked in the office at the former Bolens Manufacturing Company in Port Washington.  For over 21 years she was the program assistant for the Wisconsin Department of Agriculture in Port Washington with its office under the Post Office. She retired in 1980.  Upon her retirement she enjoyed time spent with family and friends.  She was always available for a card game; whether it was Sheepshead, Canasta, Bridge or Cribbage.  She had been active in St. Mary’s Church and its Christian Women’s group, as well as the Port Washington Senior Center, its choir and card clubs.

She is survived by her son Ned Bartelt of Port Washington, sisters-in-law Marian Merrill of Port Washington and Delores Leppla of Cedarburg, nieces, nephews, other relatives and friends.  She is preceded in death by her husband Clarence, son Daniel Bartelt, a brother Gene Merrill, brother-in-law Clarence Leppla and brother-in-law Herbert Bartelt and his wife Eunice Bartelt.