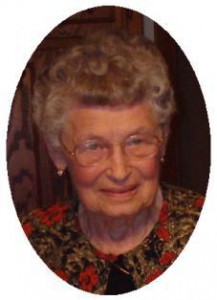 Sylvia L. Weyker, 82, of the Town of Port Washington died peacefully on Saturday, October 8, 2011 at Lasata Care Center in Cedarburg where she had been a resident the past two weeks.

She was born on October 15, 1928, daughter of Ado and Lucy Sanem Watry in Chilton, WI.  On October 15, 1949 she married Vincent J. Weyker of the Town of Port Washington at St. Mary’s Church in Port Washington.  She joined her husband in the Town of Port Washington and raised her family.  Over the years she had worked at Rexnord Plastics Division in Grafton for ten years and High Voltage Components (HVC) of Fredonia in the 1970’s.  She was a volunteer “Pink Lady” for many years at the former St. Alphonsus Hospital in Port Washington and for a time in Mequon at St. Mary’s Hospital-Ozaukee.  She enjoyed wintering in Florida with her husband for over 25 years, the Port Washington Senior Center and playing cards.  She and her husband have been members of the “We Love To Dance Club” and the “Wisconsin Polka Boosters”.  She just loved the Sunday polka dancing and being out with friends.

Thank you to the staff of Lasata Care Center and Home and Hospice Advantage of Sheboygan for their loving care and compassion.