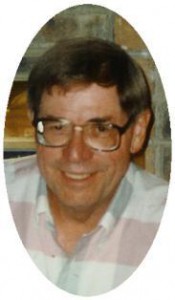 He was born July 14, 1926 in Chicago, Illinois to Henry and Martha Young Wedemeyer.  He grew up in Park Ridge, Illinois and served in the military during World War Two.  Upon his return he studied Electrical Engineering in Chicago.  He married Martha Mellin of Chicago on November 7, 1953 in Chicago.  They moved to the Milwaukee area for work and resided in Hales Corners for over 32 years.  He was a studio supervisor for the television station Channel 12 in the early 1960’s for 12 years before working for Johnson Controls, producing Education Programs in the Television Film Production department for 15 years, retiring in 1988.  In 1990 they moved to Port Washington.

Harold had a long lasting love of aviation and was active with the Experimental Aircraft Association (EAA)  in Oshkosh, Wisconsin.  Together with his wife, they were active volunteers for the EAA’s Annual Airshow for many years.  He enjoyed playing golf, traveling, tending his garden and home.  He was a gentle man who shared his life with his wife spending most of their time together and recently celebrating 55 years of marriage.