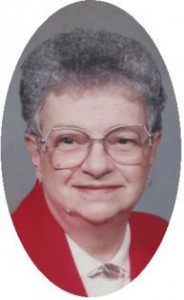 Mary Ellen enjoyed spending time with her family, especially takling trips to Crivitz, Wisconsin with her husband.  In 2004 they moved to the Maple Crest Apartments from their West Grand Avenue Home.  Her husband Ollie preceded her in death on October 5, 2004.  In August 2008 she moved to Ellen’s Home.