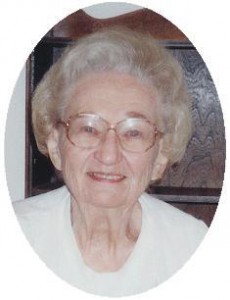 She was born June 3, 1917 to Glenon C. and Florence Harrower Webb in Curtis, Wisconsin. A graduate of Port Washington High School she worked at Smith Bros. Restaurant as a waitress. Later she worked for Badger Raincoat and took the Interurban to Milwaukee for Business College.

She applied for and received a job at the FBI and had only a week to get to Washington D.C. She started working for the FBI in 1943 under John Edgar Hoover. In 1986 she retired after 43 years as the Chief Clerk of the Milwaukee Office. While in Milwaukee she sat on the Milwaukee Safety Commission. She enjoyed traveling and had seen many countries several times. Maxine was also a member of the Wisconsin Service League.

After retiring she liked to keep busy and worked for Open House Estate Sales up until last week. In 2003 she moved to Port Washington from Milwaukee. She also had a cottage in the Minoqua area and enjoyed being up north. Her family was important to her and Maxine loved being with her nephews and their families.

She is survived by her sister Beverly (Paul) Tutas of Port Washington and nephews Scott (Sandy) their children Jennifer, Stacey and Jeremy Tutas of West Bend, Dean (Valenda) their children Brittany and Bethany Tutas and Todd (Katie) their Children Ashley, Emily, Riley and Max Tutas all of Sheboygan. Further survived by other relatives and friends.