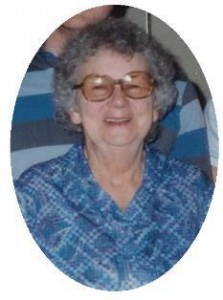 Florence E. Formolo, 89, formerly of  East Kingsford, MI died August 24, 2004 at Heritage Nursing Home in Port Washington where she had been a resident since 1989.

After living in East Kingsford over fifty years, she moved to Port Washington to be near her daughter, Audrey.  Throughout her life she had mainly been a homemaker, but later in life she took a job at the Iron Mountain VA hospital in the dietary department.  She retired from there in 1978.

She enjoyed living in the Upper Peninsula, reading, taking long walks and jigsaw puzzles.  She had been a member of  the American Martyrs Catholic Church, Kingsford for many years.

She is survived by her daughter Audrey (James) Cayo of Franklin, WI, son Edmund Saler of Cedarburg, WI, 20 grandchildren, numerous great-grandchildren, a sister Elaine Canavera of Niagra, WI, nieces, nephews, other relatives and friends.  She is preceded in death by her husband, infant daughter Sally Ann, sons Alfred and Randall, a granddaughter and a great-grandson.

A Mass of Christian Burial will be celebrated at 10 AM, Monday, August 30, 2004 at St. Anthony Catholic Church, Niagra, WI.    Reverend Michael Betley will be the celebrant.  Interment will be in the Iron Mountain Cemetery, Iron Mountain, MI.  Visitation will be after 9AM Monday AT CHURCH.