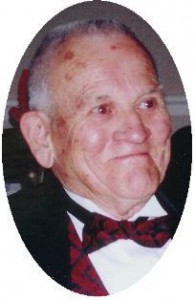 He was born February 15, 1925 in Sheboygan, Wisconsin to Francis L. and Rose Kirsch Watry.  The last of five children, his three oldest siblings all died at young ages from black diptheria.  He attended St. Peter Claver Grade School and graduated in 1943 from St. Francis Minor Seminary  in Milwaukee.   He would spend the summers during high school in Port Washington, playing baseball for the CYO.  In June 1943 Leo began his service in the Navy.  He worked his way to Aviation Ordnanceman Second Class before being discharged in May of 1946.  He also  served as a reservist from 1951 to 1954.  He took the Postal Exam and after the results came back started working for the Post Office.  He retired in 1984 after 37 years.

He met Barbara Lovering of South Milwaukee and married her in Appleton, Wisconsin on August 22, 1953.  Together they raised nine children in Port Washington.  He was active with the local boy scouts with his children.  Barbara preceded him in death on September 3, 1985.  Leo was a member of the Van Ells – Schanen American Legion Post 82, Port Washington and the Knights of Columbus Ozaukee Council 2035.  In 1996 he moved to Florida with his son Rich.