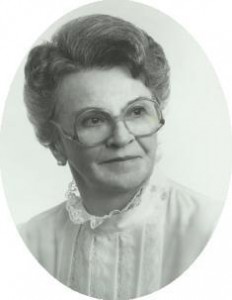 Anita’s Luxembourg heritage was very important to her.  She was to co-founder of the Luxembourg Society of Wisconsin, Belgium, Wisconsin  in 1977, serving as their first president and editor.  After retirement she continued her involvement in Luxembourg genealogy with her husband and was active in the Wisconsin Genealogical Society.  They enjoyed their travels to Luxembourg and the people they met.

She was a charter member of the Belgium Memorial Post 5373 VFW Ladies Auxiliary, Royal Neighbors Camp 8373 and a past president of the Ozaukee County Historical Society .  She was also active member of Immaculate Conception Church in Saukville in it’s Christian Mothers.  When her daughter was young she was active in the Girl Scouts for over 15 years.

She is survived by her husband Arnold of Whitelaw; her daughter Vicky (Jerry Lauters) Becker of Denmark; granddaughters Melissa (Gary) Olsen of Ypsilanti, MI and Stefani (John) Seidemann of Wauwatosa, WI; her sister Lorraine (the late Harvey) Biever of Port Washington, her niece Lori (Mark) Minz of Grafton, WI, other relatives and friends.