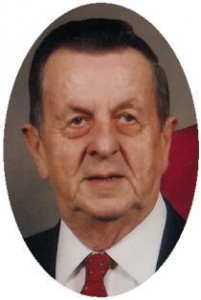 He was born September 9, 1917 in Holy Cross to Mathias and Margaret Ruhland Thill.  He served as a Private First Class in the Fifth Combat Battalion of the US Army from 1941 to 1945 station primarily in Germany.  He married Arline Janke of Fredonia at St. John’s Lutheran Church in Fredonia on July 27, 1946.  He worked as a welder for the Koehring Corporation in milwaukee for over 25 years, retiring in 1981.

Tom was a lighthearted man who enjoyed bringing a smile to everyone’s face with his one liners and quips.  He was a faithful member and usher at St. John’s Lutheran Church in Fredonia and a life member of the Warren – Kane American Legion Post 410, Fredonia.  He was proud of his home and liked to care for the yard and also enjoyed playing the accordian, piano and organ.

He is survived by his wife Arline Thill of Fredonia and a daughter Diane (Don) Depies of Adell.  Futher survived by his brother-in-law Elmer (Virginia) Janke of Fredonia, sister-in-law Joan Janke of Montana, other relatives and friends.  Preceded in death by his son Dennis Thill, sisters Elnore Mannebach and Gertrude Lauters and Brother Roman Thill.