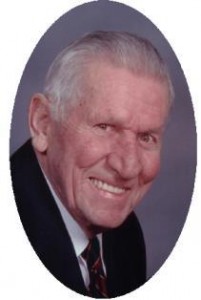 He was born January 27, 1923 in Port Washingtonto Joseph and Esther Retzer Swatek. He served in the Coast Guard as a Motor Machinist Mate Second Class during World War Two. On January 15, 1955 he married Lillian Burton Ternes at St. Mary’s Church in Port Washington and lived on W Grand Avenue for many years.

Fritz operated the Shell Service Station on W Grand Avenue, where Grand Avenue United Methodist Church now stands, from 1944 into the 1960’s. He then worked for Simplicity in the “Quality Assurance” department. He was a member of the International Association of Machinists & Aerospace Workers Local 1430.
He was a member of the Port Washington Senior Center and it’s Green Felt Vlub and enjoyed woodworking and bowling years ago.  In 1972 Fritz golfed a hole-in-one at Hawthorne Hills Golf Course.