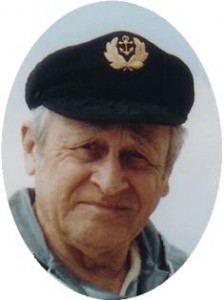 He was born on March 20, 1916 to Marcus “Max” and Theodora “Dora” Bay Swatek in New London, Wisconsin.  He was raised in Port Washington and got the nickname Spiel by his buddies.  He married Lydia Deblitz who grew up in Colgate, Wisconsin and went to school in Milwaukee on October 12, 1940 in Dubuque, Iowa.

Spiel entered the Navy during World War Two and learned the carpentry trade, earning the rank of Carpenter’s Mate Second Class.  After the war the couple settled on Grand Avenue in Port Washington and lived there for over sixty years.  He began work at the Wisconsin Chair Factory and then for various construction companies in Milwaukee.  Later he took a job in the Port Washington Saukville School System as a custodian and night shift supervisor.  He really liked the students and teachers, and formed many friendships over the years, retiring in 1981.  He enjoyed his family, cars, home, yard, fishing and the activities of his special small town.   He was a member of the Van Ells – Schanen American Legion Post 82, Port Washington.  Recently they moved to the Harbor Club.   Spiel loved the art of conversation and didn�t miss much.  He had a dry wit and was always ready with a joke.

Special thanks to the dedicated staff members of the Harbor Club and Horizon Healthcare for taking care of Pop in his latter days.  The family appreciates the extra love and affection that he received at the end.