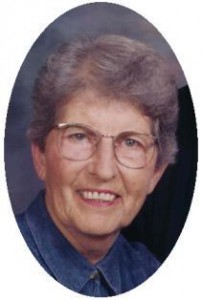 Vi had resided in Port Washington more than forty years on North Stanford Street.  The past few years she lived at the Harbor Campus there.  A proud homemaker, she had worked for Simplicity Manufacturing Company of Port Washington and Wisconsin Telephone over the years, amongst others.  She will be remembered for her volunteerism.  She was very active with First Congregational Church and a former choir member.  She gave of herself through the Port Washington Food Pantry and the Meals on Wheels program.  She also enjoyed square dancing with her husband.

She is survived by her son Geno (Nancy) Fidler of Port Washington, grandchildren Nicole, Andy and Jenni Fidler, three sisters Deloris (the late Harry) Poradeck and Lulaine Henderson, both of Oconto Falls and Leatrice (Billy) Townsend of Sturgeon Bay, her sister-in-law Ione “Dickie” (the late Arlyn “Pokie”) Bitters of Lena, other relatives and friends.