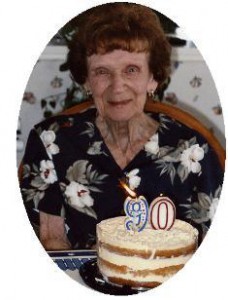 She was born in San Francisco, California on June 12, 1916  to Francis and Margaret Barbian Klauer.  The family moved to Milwaukee, Wisconsin where she met and married Henry E. Stern on October 13, 1957.  After their marriage the couple relocated  to Port Washington and raised their daughter. Henry preceded her in death May 30, 1982.  After the death of her husband, Berni kept busy with friends, playing cards and traveling.  She visited Kathi and her family in Texas two to three times each year until finally moving there in October 2005.

Berni leaves behind to cherish her memory one daughter: Kathi Davis and her  husband Roger; two wonderful grandsons: Taylor and Ryan Davis, whom she adored; three sisters-in-law: Ann Klauer, Mary Jane Stern and Luella Wellenstein; as well as nieces, nephews and friends.  She was preceded in death by her parents; her husband; her brother: Frances “Bud” Klauer; and sister: Reynildis “Sis” Labisch.