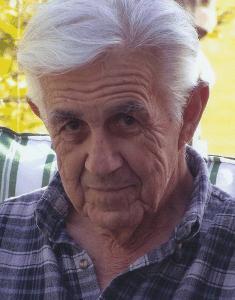 Nicholas W. Schmit, 80, of Section Line Road in Waubeka died Wednesday, May 9, 2007 at his residence with his family by his side.

He was born June 14, 1926 next to St. Rose Rectory in Fredonia to Nicholas and Cecelia Schinker Schmit.  He graduated from Port Washington High School and attended the University of Wisconsin in Madison for two years.  He served in the United States Navy as a Signalman during World War Two from 1944 to 1946.  He married Helen “Pat” Schlenvogt  on July 14, 1951 at St. Mary’s in Port Washington.   Together they lived on the Northwest side of Milwaukee, raising a family for 35 years.

Nic was an iron worker for the former Hank Reidel Erecting in Port Washington, PW Walsh and retired from John Hennes Company in Milwaukee in the mid 1980’s.  He worked mostly east of the Mississippi River on skyskrapers.  He was truly proud to be an iron worker and was a member of Iron Workers Local 8 Union in Milwaukee.

In 1989 Nic and Pat moved to Fredonia.  Nic loved astronomy and the molecular universe of particle physics.  He shared a concern for energy conservation well before it was poplular and loved being in Waubeka.  He was a rather quiet man who just had a way about him that people were drawn to.

A Mass of Christian Burial will be celebrated at 7PM Monday May 14, 2007 at Holy Rosary Parish, St. Rose Chapel, 315 Fredonia Avenue, Fredonia.  The Reverends Richard Fleischman and Jerry Schroeder of St. Benedicts Church, Milwaukee will concelebrate.  Interment parish cemetery.  Visitation will be from 4-6:45PM Monday at church  Memorials to the Sharon S. Richardson Community Hospice or the St. Ben’s Meal Program are appreciated.