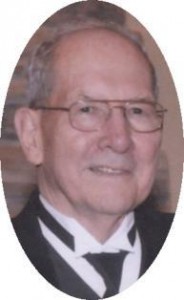 He was born July 2, 1925 to Herman and Melitta Janke Slater in Random Lake.  He grew up working on the farm after his dad died when he was young.  He married Betty Jane Gerrits of Hollandtown, WI in May, 1948 in Dubuque, IA.  Shortly after his marriage he served in the US Army as a Private First Class during peacetime.  Upon his return he started working at Keikhaefer and American Motors.  He started for Wisconsin Electric Power Company in Port Washington in 1951 and became a steamfitter working in the streets and tunnels of Milwaukee until he retired in 1987 as a supervisor.  His wife Betty Jane preceeded him in death on April 20, 2002.  He married Lucille “Lucy” Lubach Ohde of Beechwood, WI on October 30, 2004 at Redeemer Lutheran in Plymouth, WI.

Al was an active member of St. John’s Luth. Church in Fredonia and a member of the Van Ells-Schanen American Legion Post 82, Port Washington.  He was a handy man who could fix anything and liked to tinker on cars and woodworking.  He stayed fit with swimming aerobics and enjoyed golf, fishing, cards, pool-especially the green felt club at the Port Washington Senior Center and the McDonald’s Gang.