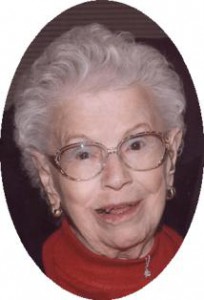 Longtime Saukville resident Josephine “Jo” Quade was reunited with her beloved husband of 46 years, Walter, on Friday, March 18th, 2011 at the age of 98.  She passed peacefully in her home surrounded by loving family members and her special caregiver.

The family moved from Milwaukee to Saukville in August, 1947.  Josephine was a very loving, kind and gentle soul who found joy in giving and helping others.  Jo enjoyed the simple pleasures in her home, tending the beautiful flower gardens she planted, baking for family and friends and playing cards.  She was active in area senior centers, playing cards and calling Bingo.  She also volunteered at Lasata Health Center of Cedarburg.  When she became less mobile, her pastime was feeding and watching the birds and squirrels in her backyard.  She was senior member and past secretary of St. Peter’s Ladies Guild for forty plus years and was blessed with visits from many friends and church members during her later years.  Her biggest source of joy and pride was her family.

Funeral services will be 6PM Tuesday, April 5, 2011 at St. Peter’s United Church of Christ, 166 W. Dekora St., Saukville.  Visitation will be at the church from 3:30PM Tuesday until the service.  Interment will be at Wisconsin Memorial Park in Brookfield, WI.  Memorials to St. Peter’s Church appreciated.