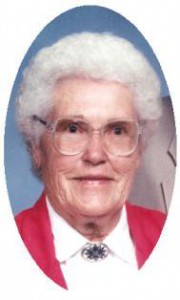 Irma M. Skruby, 95, formerly of Port Washington died Saturday, September 20, 2008 at the Village of Manor Park in West Allis where she had been a resident for the past year.

She was born on May 19, 1913 on a farm in Manitowoc County, daughter of Louis and Bertha Duessing Bahr.  She moved to Cleveland, WI when she was six years old.  She learned to love animals as a child on the farm.  She attended public school, graduating from the eighth grade.  When she was old enough to get a work permit she took a job at a canning factory in Cleveland. Later she worked at various places throughout Sheboygan during the war, moving to Port Washington to work at the Port Washington Chair Factory.

After the war, on April 10, 1948 she married Philip Skruby of Port Washington and soon after built a house on Second Avenue.  When the Chair Factory closed; she retired and cared for her mother until her death.  She and her husband bought a mobile home and camped at different campgrounds throughout Wisconsin.  They participated with a national group of campers that called themselves the �Rolling 8 Balls� for many years.  They especially liked Kentucky and its horses she remembered, probably because of her time spent on the farm.

She lived in her home over 52 years.  Her husband preceded her in death on February 2, 1991.  Ten years later she moved the Harbor Village in Port Washington and most recently to West Allis.  While in Port she enjoyed her friends and neighbors and the McDonalds gang.  She loved to sew and make quilts, of which she was very proud.  She loved tending to the birds and squirrels and dogs and cats.

Funeral services will be at 3 PM Tuesday, September 23, 2008 at St. John’s Lutheran Church, 217 N. Freeman Drive, Port Washington.  Reverend John Klieve will be the officiant.  Interment will be in the Union Cemetery, Port Washington.  Family will receive friends from 2 – 3 PM Tuesday AT CHURCH.  Memorials to the church are appreciated.