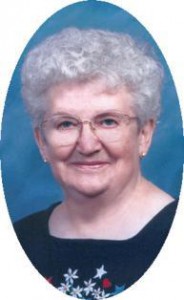 She was born on June 13, 1920 in Springdale, Wisconsin in Fond du Lac County, daughter of  Herman H. and Leone M.  Roeder Zitlow.  She grew up on the family farm and later married Carl Gutzman of Oshkosh on August 10, 1940 at Christ Lutheran Church in Oshkosh.  There they started to raise a family and later moved to Port Washington in 1943 when Carl took a teaching position at Port Washington High School.  For many years they lived at the bottom of St. Mary’s Hill, next to what many call the “Mary Bichler Shop” on North Franklin Street.  In the late 1940’s, Carl was diagnosed with multiple sclerosis.  She continued raising her family and caring for Carl until his death on July 30, 1955.

Doris had taught Sunday School at St. John’s Lutheran Church and was a member of the Port Washington Junior Women’s Club.  She enjoyed playing cards and Bingo, sewing and crocheting.  Most recently she had lived on Sunset Road, Port Washington and the last two years at Samaritan Health Center in West Bend.