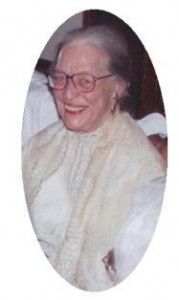 June M. Torke Domoe, age 80, died Saturday, March 6, 2010 at Eastcastle Place, Bradford Terrace in Milwaukee where she had resided for the past five years.

She was born on April 29, 1929 in Waldo, Wisconsin; daughter of Orlo and Olive Didier Torke.  She grew up on the family farm just south of Lake Church in the town of Belgium.  She attended St. Mary’s Parish and school in Lake Church.  She graduated valedictorian of her 1946 Port Washington High School class.

She received her bachelor’s degree from the University of Wisconsin-Madison and later in 1955, her master’s degree in Spanish from the same institution.  During her undergraduate years, a one semester study abroad program in Sorbonne, France became an 18 month travel adventure that would define the rest of her life.

She taught French and Spanish at Janesville High school from 1953 to 1954.  Later in 1955 she began to teach Spanish at Nicolet High School in Milwaukee and remained until her retirement in 1981.

In 1958, she participated in a Fulbright Classroom Teacher Exchange program to teach English in Havana, Cuba.  She continued teaching through the full term despite a minor change of circumstances; The Cuban Revolution and Fidel Castro’s rise to power.  She shared her firsthand experiences through letters to her family and friends.

In the early 1970’s she became an early coordinator for the InterAmerican Workshop for students to travel & study which later became the National Registration Center for Study Abroad (NRCSA) branching out to include adults and non-students.  Years ago she helped coordinate the Luxembourg Society of Belgium’s first organized trip for its members to Luxembourg.

She had been active with numerous education and language associations.  She was a past president of the Wisconsin Chapter of the American Association of Teachers of Spanish & Portuguese and a long-time member of Milwaukee Jazz Society.  She loved her jazz music.

June touched the lives of many family and students expanding their world view and inspiring them with the confidence needed to live in that world.   An example of June’s fierce independence was her first trip to Mexico at the age of 19.  She crossed the border riding on the back of a flatbed chicken truck and traded English lessons for room and board.

She had lived in Mequon from 1964-1984, later moving to Bayview Terrace, Bayview and in 2005 moved to the Bradford Terrace in Milwaukee.

A Celebration of Life will be held at 4:30PM Thursday, March 11, 2010 at the funeral home.  Dr. Mary Foley of St. Joseph Parish, Grafton will officiate.  Family will receive friends 2-4:30PM Thursday prior to the service. Interment will take place in Holy Sepulcher Cemetery in Cudahy.   Memorials to the Juney Foundation, 3327 N Shepard Avenue, Milwaukee, WI 53211 for educational scholarships appreciated.