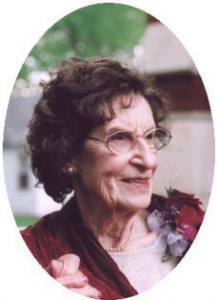 She was born April 19, 1919 in Port Washington to Nicholas and Anna Schinker Jacque.  In her youth she worked at the Gilson Foundry.  She married Elmer P. Schmit of Port Washington on February 23, 1943 at St. Mary’s Church.  He ran JL Schmit Buick Pontiac Cadillac dealership of “The Columbia Garage” on N Wisconsin Street while she raised her family.  He preceded her in death February 28, 2011.

Lucille was a member of the former Daughters of Isabella, St. Mary’s Christian Women and a past president of the Port Washington Women’s Club.  She enjoyed gardening, baking and golf.  She also liked to sew and was the seamstress to family and many friends.  She kept fit by swimming at the pool at Thomas Jefferson Middle School, keeping track of her laps until her late 80’s.