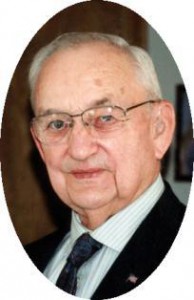 He was born November 8, 1918 in Port Washington to John L. and Cecilia Lecher Schmit.  He served as a Captain in the Army during World War Two.  He married Lucille C. Jacque of the Town of Port Washington on February 23, 1943 at St. Mary’s Church in Port Washington.  He ran the J L Schmit Buick Pontiac Cadillac Dealership on N Wisconsin Street (also known as the Columbia Garage) with his brother Don.    Elmer was a Past Commander of the American Legion Post 74, Oconto, Wisconsin, past member of the Board of Directors of the St. Vincent DePaul Society, Port Washington Savings and Loan and also a member of the Knights of Columbus and Port Washington Rotary.