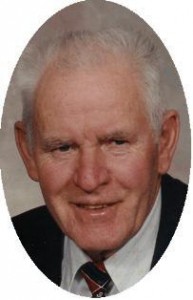 He was born in November 19, 1926 in Waubeka, Town of Fredonia, Wisconsin to Henry and Hildegard Huiras Russart.  His early years were spent playing sports, hunting and fishing with his father and three younger brothers.  In his teens he worked on the Lester and Lorraine Huiras farm until he took a job with the former Gilson Foundry in Fredonia.

Henry was drafted at the age of 23 for the Korean War and served in the 27th Infantry of the U.S. Army from September 22, 1950 until June 23, 1952.  He was honorably discharged with a rank of Private First Class.  He earned a Bronze Star in combat for ‘valorous actions and exemplary devotion to duty in keeping with the high traditions of the American soldier’.

He returned to working at the Gilson Foundry and enjoying bowling and playing sheepshead.  He met Patricia Damrow of Sheboygan in a bowling league. They wed April 12, 1958 at Holy Name Parish in Sheboygan.  They lived there for three years, then moved to Fredonia where they have remained.

While raising his family, Henry built a log cabin near Crivitz, WI.  They continued to spend weekends and vacations fishing and swimming for many years.  After 43 years of service, Henry retired from the foundry in 1988.

A Mass of Christian Burial will be celebrated at 7PM Thursday Oct. 4 at Holy Rosary Parish-St. Rose Chapel, 311 Fredonia Ave., Fredonia.  Reverend Dick Fleischman will be the celebrant.  Interment will take place in the parish cemetery with military rites from the legion post and Belgium Memorial Post 5373 VFW.  Visitation will be from 4-6:45PM Thursday AT CHURCH.  Memorials to the parish are appreciated.