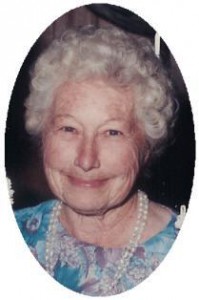 Lizzie was born November 2, 1920 in the Town of Port Washington to Frank and Anna Heinz Federmeyer, growing up on the family farm.  She married Calvin Clevenger of Pennsylvania on June 23, 1962.  Together they lived on Dries Street in Saukville.   She worked at the former Chair Factory, the former Philip Sales in Belgium and Moldcraft of Port Washington and was a member of Immaculate Conception Church in Saukville.   Her husband Calvin preceded her in death May 15, 1980.

She moved from Dries Street in the early 2000’s and lived for a while at the former Marian Heights in Port Washington and most recently at Cedar Gardens in Cedarburg.  She enjoyed knitting, sewing and crocheting and will be remembered for her fancy work and quilts.   Lizzie enjoyed the outdoors, gardening, taking walks and enjoying the sunshine.

She is survived by her sisters Marie Olan of Menomonee Falls, Julia McKee of Fillmore, Florence Federmeyer of Grafton, Lucille (Richard) Sutter of Hartford, and Angela (Stanley) Tackes of Grafton.  Further survived by nieces, nephews, other relatives and friends.  Preceded in death by her husband Calvin, sisters Gertrude Federmeyer and Helen Van De Loo and 4 brothers Nicholas, William, Francis and Joseph Federmeyer.