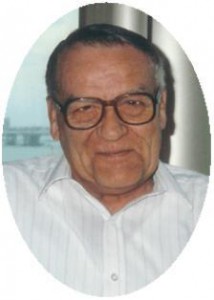 He was born July 24, 1930 in Port Washington to Bennon and Johanna Dauska Rosewitz.  He grew up in Port Washington and his father operated the Columbia Bar & Grill, now George’s King of the Hill.  In 1947 he joined the United States Army and was discharge after his tour as a Private First Class.  On August 25, 1956 he married Carol Schmit of Saukville at Immaculate Conception Church in Saukville and just recently celebrated their fiftieth wedding anniversary.  They raised their family in Saukville and he was active at church while the children were young.

Ben worked for Schmit Bros. Ford as a service manager until his retirement in 1989.  He loved to cook, tend the yard and garden.  Ben liked the outdoors and enjoyed hunting and fishing.  He showed his artistic side through oil paintings of outdoor scenes and carving wooden ducks.