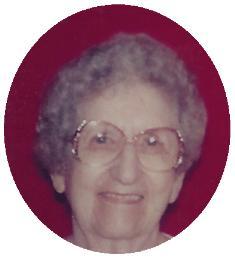 Gladys M. Reiter, 97, formerly of Port Washington, died Monday, October 29, 2007 at her granddaughter’s home in Fredonia surrounded by her family.

She was born in Newburg, Wisconsin on August 11, 1910 to Albert and Anna McGinley Brott.  Shewas the youngest of seven children and grew up in Newburg.  She moved to Port Washington and taught before she married.  On July 8, 1930, she married Lawrence M. “Pickles” Reiter of Port Washington in Milwaukee.  He preceded her in death on April 5, 1970.

The family lived for a time on Harrison Street in Port Washington later moving to Garfield Avenue where they resided for over 50 years.  Most recently she moved to the Harbor Village for a few years and finally sharing her granddaughter’s home.

Gladys will be remembered for the 25 years she clerked at the former Ben Franklin Store in Port Washington.  She enjoyed sewing for herself, family and others.  She became quite the seamstress, mending and making clothes.  She loved to crochet and knit, providing afghans, slippers and even hats for newborns at the former St. Alphonsus Hospital.  She was a wonderful cook and baker, enjoyed canning and crossword puzzles.  At the age of 51 she received her driver’s license.  Selfless in many ways, she would taxi those who were in need of a ride for many years.  She valued the old tried and true ways, even continuing to hang her wash, long after electric dryers where available.  She also was a longtime member of the St. Mary’s Christian Women and the Port Washington Senior Center.

A Memorial Funeral Mass will be celebrated 1 pm Saturday, November 3, 2007 at St. Mary’s Catholic Church, 430 N Johnson Street, Port Washington with the Reverend Tom Lisjewski as celebrant.  Final interment will be at Holy Trinity Cemetery in Newburg.  Visitation will be Saturday from 11:30am until time of mass at church. Memorials to the American Cancer Society appreciated.