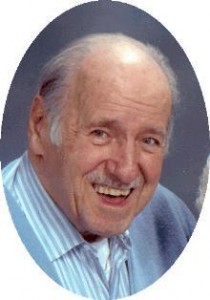 Gerald was born January 2, 1925 in Milwaukee, Wisconsin to Alois and Hilda Chesak Reiherzer.  He met Lenor Maynard of Prairie du Sac, Wisconsin and married her October 11, 1947 at Holy Redeemer Catholic Church in Milwaukee.  Mr. Reiherzer worked for Wisconsin Electric Power Plant in Milwaukee and Oak Creek.  He was moved to the Port Washington Plant and moved to Garfield Avenue in Port Washington in the 1950’s.  He worked as a Mechanical Supervisor there for over 38 years and retired in 1985.  He was a member of the International Association of Operating Engineers, Local 317 and the Knights of Columbus Ozaukee Councin 2035.  He enjoyed playing sheepshead, bowling and golf.  Mostly he was a handiman who could fix anything in and around the house.