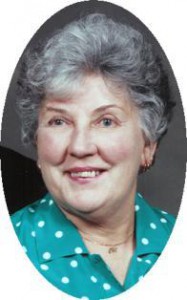 She was born December 6, 1921 in Belfast, Northern Ireland to Hugh and Minnie Nesbitt Boyd. She married Alfred Weir of Ireland and in the early 1950’s they immigrated to the United States.  He preceded her in death in 1965.  On September 29, 1970 she married Samuel Rainey of Ireland in West Allis.

She lived mostly in West Allis and Milwaukee, Wisconsin and was a teachers assistant in the elementary schools for Milwaukee Public Schools.  She enjoyed getting together with the Britanic Social Club, knitting  and making Irish Soda Bread.  After her husband Sam retired they lived in Florida for 15 years and moved Grafton, Wisconsin in 1999.  Berta’s faith was important to her and she was a very active member of Cornerstone Church in Grafton.  Her husband Sam preceded her in death May 17, 2007.

She is survived by her son Brian (Jeanne) Weir of Port Washington and daughter-in-law Karen.  Further survived by graddaughter  Erin (Michael) Williams, brothers John (Ann) Boyd and Tom (Betty) Boyd, both of Ireland, sisters Beth Harr of Sussex, Wisconsin and Kathleen Bradford of Ireland, other relatives and friends.  Preceded by her husbands, son Colin Weir, 1 brother and 2 sisters.