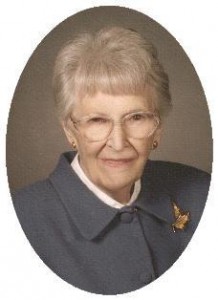 She was born June 2, 1918 in Milwaukee, Wisconsin to Joseph and Anna Reinke Hoffmann.  In 1936 she graduated from Port Washington High School.  She married Robert F. Kendal of Port Washington in April 1953.  She worked for a while at the First National Bank in Port Washington and the former Bolens.

Lorraine was an active member of Friedens Evangelical Church for many years.  She was a charter member and past president of the Ladies Evening Guild and a member of the Ladies Afternoon Guild.  She was also a long-time member and past matron of the Ozaukee Chapter 147, Order of Eastern Star.  Over the years she was also a very active volunteer at the former St. Alphonsus Hospital in Port Washington.  Her husband Robert preceded her in death November 22, 1993.