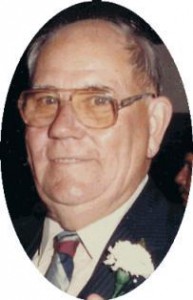 He was a member of the International Association of Machinists and Aerospace workers Local 1430 and very active in the Catholic Order of Foresters achieving the Legion Of Honor for his involvement of over 75 years.   After his wife died, he became active in the local St. Vincent DePaul store.  In his 80’s he drove truck and helped around the store.  While there he met Catherine Yankunas and their friendship continued for almost the next 20 years.  They enjoyed each others company with dinner and dancing at such places as Johnsonville and Adell.  She died in June, 2002.

Charlie is survived by his dear friend Ann (Bill) Mikyska, many nieces, nephews and other relatives and friends.  He is also preceded in death by sisters Marie Goeden, Margaret Thill, Johanna Mueller and his brothers Nicholas, Simon and Peter Puerling.

Funeral Mass of Christian Burial will be celebrated at 7PM Wed. March 3 at St. Mary’s Catholic Church, 430 N. Johnson Street, Port Washington.  Reverend Allan Sommer will be the celebrant.  Cremation will follow with final interment in the parish cemetery.  Visitation will held AT CHURCH from 5 – 7 PM Wednesday.