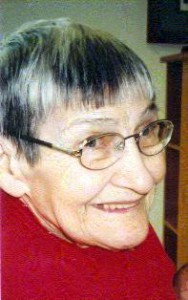 Margaret V. Bergschultz, 83, formerly of South 11th Street, Sheboygan died Monday, March 1, 2004 at Sheboygan Progressive Care Center where she had been a resident for the past 1 ½ years.

On November 21, 1939 she married Myron A. “Miney” Bergschultz from Wausau in Port Washington. Together they operated the Cedar Beach Bar in Lake Church, town of Belgium in the late 1960’s. They had lived on Cedar Beach Lane for many years. Miney preceded her in death on August 2, 1989 and she moved to Sheboygan in 1991.

Over the years, Margaret had waitressed and cooked at the former Roob’s Restaurant and Harry’s Restaurant in Port Washington. She operated a catering business with Sharon Tackes for many years. She also worked at Tecumseh (Power Products) in Grafton until she retired in the late 1980’s. She was a member of the Veterans of Foreign Wars Post 5373 Auxiliary and the Friends of Harrington Beach. She loved her animals such as Tonto, Baybee and Snickers. Many considered her a great cook.