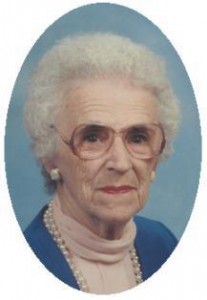 She was born on December 22, 1908 in the town of Rantoul, WI, oldest the eleven children of Adolph and Elenora Wolf Behnke. In her youth she worked at the former Clores Grocery in Plymouth and I.K. Meyer Seed and Feed in Beaver Dam.  She attended Sheboygan Business College and shortly after married Peter A. Vanderhoof of Bovina, WI on October 16, 1926 in Hilbert, WI.  She and her husband returned to Plymouth and purchased the grocery; operating it until they moved to West Salem to operate their local movie house.

After Peter passed away on May 9, 1951, she took a job with the Brillion Iron Works in the office.  On November 10, 1956 she married Maximilian Prabst of Cascade, WI in Brillion.  He preceded her in death in October, 1970.  For many years she had worked at the Cascade and Waldo Post Offices until her retirement.

In 1983, she moved to Port Washington to be near her daughter.  She will be remembered for her strong faith and her quiet demeanor.  After leaving the Brillion Iron Works she was instrumental in the formation the retired office workers annual dinner and social.

A memorial funeral mass will be celebrated at 6 PM Wednesday, June 29, 2005 at St. Peter of Alcantara Catholic Church, 1802 N. Wisconsin Street, Port Washington.  The Reverend Pat Wendt, pastor will be the celebrant.  Interment will in St. John the Baptist Catholic Cemetery in Plymouth, WI.  There will be no visitation, family will receive family and friends after mass in the school hall with a luncheon and fellowship.  Memorials to the church appreciated.